The bet with the Devil

When the Old Cathedral was to be replaced by a beautiful new one, Master Gerhard of Ryle, who had studied the art of cathedral architecture in France was commissioned to design a new plan within a period of one year. He started the work enthusiastically but whenever he was certain that he had found an executable plan, new problems arose and he began to have doubts. When he was walking on the other side of the Rhine, completely filled with his sorrows, he came upon a large rock which was called the "Devil's Stone". Here he fell asleep. When Master Gerhard awoke, a stranger stood before him, dressed in the manner of the French architects. The foreigner began to draw in the sand with his stick the lines of a building plan which Gerhard easily recognized as the completed plan of the Cathedral. Astonished, Gerhard asked the foreigner what he must give in exchange to receive this plan. The answer was: "I will help you build this structure in three years when you offer yourself as well as your wife and child. In case that I have not completed the building at the first crow of the rooster at the end of the last night of the third year, you will be free."

Not even the devil can complete such a massive structure within three years time, thought Master Gerhard and agreed to the bet. From then on the work at the site proceeded as quick as never before. By day and night the sound of construction rang and the Master architect became more and more astounded. Soon it was rumored that weird and evel things were going on at the work site. The Master architect's wife heard this. Worried she questioned her husband and to her disdain Master Gerhard told her of the disastrous pact. In despair the clever wife began to think of a way out. One day, as she went to the market with her son, the child pointed out a magnificent rooster and tried to mimic its cry. Full of happiness the intelligent wife hugged her child because a way out of this doubtful situation had been found. Immediately she began to practice the crow of the rooster at home until the roosters of the entire neighborhood began to answer her. The last night of the third year came and the wife of the architect prayed that God would save them. Shortly before the first break of dawn, just as the last stone of the Cathedral tower was being raised to the top, she let out her cry like that of the rooster and all the roosters in the area answered her back. With a thunderous roar the Cathedral collapsed. Thus the architect and his family had been saved but the Cathedral was only finished many centuries later. 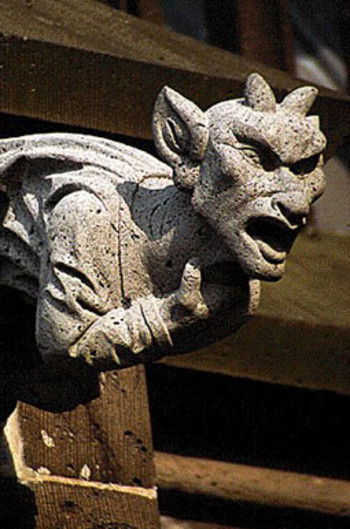 As work on Cologne Cathedral began, a large waterworks was also to be constructed in Cologne. The hired master for this project had searched a long time for an appropriate water source without any success. Finally the Cathedral architect, Master Gerhard von Ryle, began to make fun of the man, knowing full well that the water source was under the Cathedral. He would rather see the majestic Cathedral finished than this miserable waterworks. The builder of the waterworks had told his wife about this and she comforted him and thought of a plan. Knowing that the Master Architect would never reveal his secret, she purloined it with alluring words of his wife: the water source was walled up in one of the towers of the Cathedral! Then the waterworks builder obtained permission from the City Council of Cologne to dig for water there. Soon he found the needed water and could complete his work. Now he made fun of Gerhard of Ryle, whose work continued slowly despite great enthusiasm. Because of this, the Master Architect eventually became so full of doubt that he died of worry. The construction of the Cathedral could only be finished hundreds of years later. 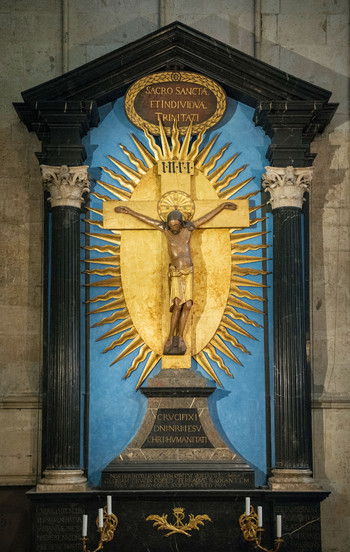 The Miracle of the Gero Crucifix

Gero donated to Cologne Cathedral, his bishop's church, a monstrous cross of wood which shortly thereafter developed a crack in the head of Christ. With great dismay it was brought to the Archbishop because the cross had already been consecrated so no layman was allowed to repair it. Gero knew what to do. He took a piece of a sacramental host and a splinter out of the Holy Cross from the treasury of the Cathedral and placed both into the crack. This cured the crack and it disappeared as if the cross were new. Today the cross hangs in the Cathedral in the Chapel of the Cross. 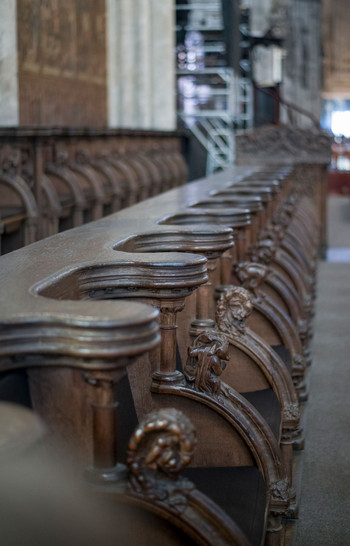 A choir boy fell asleep during evening mass and awoke only in the middle of the night. The Cathedral was already closed and so he had to remain there until morning. Exactly at midnight a small bell rang for mass and a priest appeared, obviously wanting to celebrate Mass. Since no other assistants were available, the choir boy assisted the unknown priest during Mass. At the end of the service, the priest thanked God that he had now been redeemed, and revealed to the choir boy that he had waited for him for one hundred years. From that point on fortune never left the choir boy again. He became the Cathedral sexton and died at a very old age. 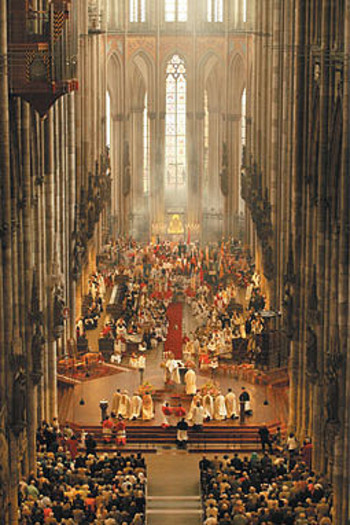 The Mass of the Ghosts

Shortly after the Elector Maximilian Franz of Austria was elected as the Cologne Archbishop, he awoke one night and felt an inexplicable urge to get out of bed and go to the Cathedral. So he left his house and stepped out into the dark, still and starry night. On the way to the Cathedral he met a continuously growing crowd of people who all had the same destination. Surprised the Archbishop noticed that the people, according to their clothing, belonged not only to different classes but also to different centuries. Neither did he hear their lively conversation nor their steps in the quiet streets. The Archbishop was terrified but nevertheless he continued unwaveringly to the Cathedral and joined the community of believers assembled there. Here he felt safe and secure. Slowly he fought his way through the crowd to the high choir and observed the event from there. The crowd rumored that they had assembled to pay someone the last honours., but whom? The Mass began: singing, virgins in white flowing gowns crowned with myrtle entered the Cathedral, followed by young monks and a large number of bishops. Trembling, the Archbishop noticed, that all the bishops he saw were his predecessors, and that he was the only living soul in the Cathedral. Captivated, he followed the procession with all the shrines of the saints of the Cathedral Treasury, as well as the celebration of the high office by Konrad von Hochstaden. At the end of the Mass, all those attending paraded in a procession to the Rhine with the shrines of the saints, where they were loaded onto a ship and transported away. Maximilian heard a whispering moan: "The saints are leaving Cologne. Who will come and protect our graves? The enemies will destroy the city and make the Cathedral into a stable for horses". Having gone back home Maximilian thought about this phenomenon for a long time. After nine years, the horror proved to be true: the French conquered the city out of which the shrines of the saints had been carefully transported away, they destroyed churches and cloisters, and used the Cathedral as a stable. 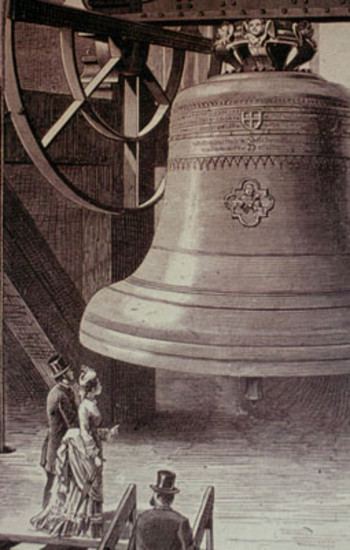 A master bell-founder by the name of Wolf was contracted to cast a new bell for Cologne Cathedral. He set to work with great enthusiasm and in no time at all, the new bell was cast and the mould dismantled. To the master bell-founder’s dismay, there was a major crack in the new bell. The team melted down the faulty bell and started again from scratch. To their horror, the second bell had a crack in exactly the same place. Boiling with rage, the master destroyed the bell with his own hands. As work began on the bell for a third time, he swore that he would dedicate the new bell to the devil and not to God. His journeymen were horrified by this pledge and went about their work plagued by a feeling of unease. However, to their surprise, everything seemed to go according to plan. The finished bell was hoisted into position with the other cathedral bells. Wolf was overjoyed until the bell was struck for the first time: it promptly developed a crack in the very same place as in the previous two bells. Shattered, he threw himself head-first from the cathedral. Since then, the bell has only ever been used to warn against tempests and conflagrations. 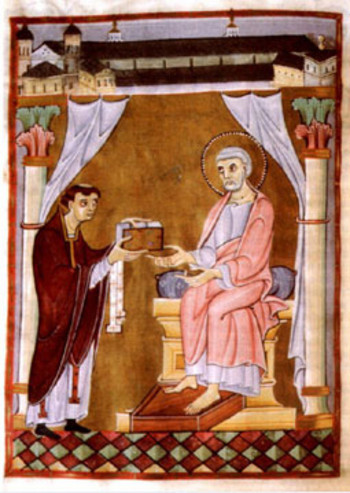 The foundation of the Old Cathedral

Shortly after Charlemagne died and was buried in Aachen, Hildebald, who was Archbishop of Cologne at that time, decided to construct a Cathedral in honor of Saint Peter and the Mother of God. As a construction site, the hill in the northeast of the city was chosen, which lay near the royal palace and the seat of the bishop. This hill was notorious for being eerie and terrible, as described by the citizens of Cologne. There were rumors that in the Roman ruins the ghosts of the former Roman gods wandered about at night. Reports of unearthly lights and frightful voices ran through the city. The construction started only slowly because the workers feared they would direct the wrath of these ghosts upon themselves. In the foggy clouds of an autumn day someone had seen columns of smoke rise from the construction pit. When finally an accumulation of inexplicable accidents became widely known, the Archbishop decided to drive the demons away with the help of God. In a particularly stormy night, he made his way to the hill and began to pray, exorcising and blessing. Screaming, the ghosts rose out of their places and besieged the trembling Archbishop in the most terrible manner. Finally they had to give in to his blessing hands. With horrible cries they turned towards the Rhine. At once the sky became starry and clear. Relieved, the Archbishop blessed the construction pit once more out of which the Cathedral should soon rise. The ghosts were never seen again from that moment on.

The Relics of Saint Kunibert save the Old Cathedral

A document of Bishop Sigewin reports that on May 3rd, 1080, a fire broke out in the Church of St. Mary of the Steps, and threatened to spread to the Old Cathedral. When the canons then brought the Shrine of St. Kunibert, the fire died.